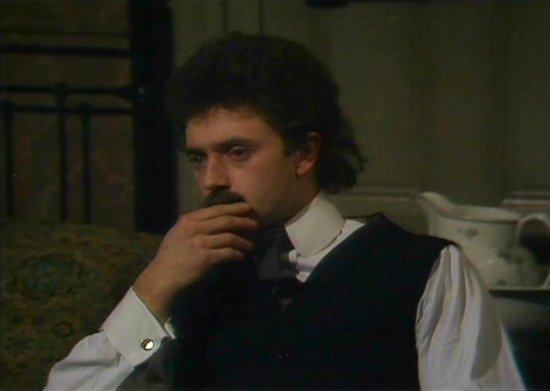 I just watched a BBC series from the ’70s called Fall of Eagles in which Patrick Stewart plays Lenin. The version of Lenin presented by the writers has him fighting against party democracy, and insisting on control of the party by the “center.” This fits in well with the liberal bourgeois view of “original sin” regarding the Russian Revolution: ie, it was made by an anti-democratic group, so, naturally, the society created by the revolution was anti-democratic. There is, however, a problem with this view of Lenin (in addition to the reasoning itself, which is dubious). I look behind me at the book shelf and I see Lenin’s collected works in more than 40 volumes, of which most of them were written before the Revolution. These volumes have articles, polemics, pamphlets, notes, and, in general, huge amounts of material directed, not at the masses, but at the Party, in which Lenin fights for his political and theoretical positions. This forces one to ask: If he could merely dictate his decisions, why work so hard to convince the Party of his view of capitalism, of the role of the peasantry, of the State, of the tasks of the vanguard party? Why the need for the tremendous theoretical battle around the “April thesis”? Why did he, at one point in 1917, nearly resign from the Central Committee in order to take his case to the Party membership, so he could convince them of the correctness of his ideas and thus adjust the Bolshevik policy? It is a strange sort of absolutism that must bring weapons of reason to the rank & file members in order to determine policy.

As for the state, let us remember that a state does not require measures of repression against the class whose interests it serves. While the Soviet state was genuinely working in the interests of the masses, it did not need to repress them. A bureaucratic clique, on the other hand, operating for its own interests against the interests of the workers, soldiers, and peasants, had to depend on force. But then, how to take the power from the armed masses, who might(!) object to government functionaries allocating to themselves the best fruits of society?

The government established by the October Revolution was built on the Soviets, and Soviets remain the best form of representative democracy yet devised. They reflected, not the will of “the people” in an abstract sense, but rather the will of the working class and peasantry. The October Revolution was made at the point where the Bolsheviks had won a solid majority in the Soviets, which were the organs of the revolutionary masses, based on democratically-elected representatives. (I should note in passing that when I say democratic, I mean democratic within the revolutionary classes: the working class, the soldiers, the peasants; I am making no claim of universal suffrage. The nobility and the capitalists, not being represented in the Soviets, were disenfranchised; anything else would have been criminal light-mindedness.)

The unprecedented influence of the Bolshevik Party, based on the confidence of the armed masses, meant that democracy within the Party became the key point of attack. While the Bolshevik Party (in alliance with the Left Social-Revolutionaries) dominated the Soviets, who held the machinery of the state in their hands, the Party became the linchpin, as it were, to governmental positions which were the ticket to such limited luxuries as Soviet society was able to produce. While things do not fall into any sort of neat, orderly cascade (Party, to Soviets, to Government), it is the case that control of the Party became the key to privilege, and that thus internal Party democracy came into conflict with the needs of the bureaucratic caste.

In fact, the development of knowledge necessary to take on Czarism, much less capitalism, required freedom to argue and disagree–arguments and disagreements that more than once spilled over onto the pages of Pravda. The principle of democratic centralism, by which the Bolshevik Party was guided, is expressed in the phrase, “full freedom in discussion, full unity in action.” These two clauses are not accidentally juxtaposed; each depends on the other. The democratic discussion and decision-making within the Party gives the members confidence that the action is the will of the Party; the unity in action is what gives the free discussion meaning. That was democracy within the Bolshevik Party, but what of the Soviets, and of the country?

“The degeneration of the party became both the cause and the consequence of the bureaucratization of the state.” (Page 82) Insufficiency requires inequality; inequality requires a State to enforce the inequality. In capitalist countries, the state operates in the interest of the capitalist class—that is, the class with privileges to protect; for exactly the same reason, in the Soviet Union the State began to operate in the interest of the careerists in the growing bureaucracy, because that is where the privileges lay. Thus the Party had to be transformed from an instrument of working class revolution to an instrument of preservation of the privileges of the bureaucrats. In order to do this, obedience to the Central Committee had to become the highest virtue, and to do this, the party had to be opened to a massive influx of non-working class individuals: functionaries, career clerks, officials, ex-military officers, all of whom had, in Trotksy’s words, “the habit of obedience.”

The battle launched by the bureaucracy against Party democracy was protracted, carried out in polemics, pamphlets, and Party meetings from 1922 to 1928. But, as ought to be clear by this time, ideas and arguments take a back seat to events in the class struggle, and to the correlation of forces. The Bolsheviks (now the Communist Party) had the confidence of the Russian working class, the soldiers, and the poorest peasants. They held this confidence through the worst trials of the Civil War, of War Communism, and of the New Economic Policy. In an important way, confidence in the Bolshevik Party reflected the masses’ confidence in themselves. With the defeat of the working class throughout the world, especially in Germany, that confidence began to erode. The forces hostile to and afraid of the working class, those who were jealous of the privileges they had by being a part of the bureaucratic mechanism of the state, lifted their heads. Many of the waverers, in losing confidence in the ability of society to secure those privileges for everyone, became increasingly concerned to preserve those privileges for themselves.

The process of coming to an understanding of political and theoretical questions within the Party is one of conflict, of sharp disagreement, of argument. Stifling disagreement within the Party hindered the Party’s ability to understand the processes it needed to influence, just as without the freedom of disagreement within the scientific community, the development of knowledge is crippled. But we have seen in our own lifetimes efforts to stifle the development of scientific knowledge, in such areas as climate change, when that knowledge would contradict the material interests certain groups. And that is exactly what began to happen in the Soviet Union. As the bureaucracy, focused on Stalin, gained power, the first attacks on democracy were within the Party—disagreement with the party leaders (Stalin, Kamenev, Zinoviev) became identified as disloyalty.

The repression of freedom to disagree within the Party led inevitably to theoretical mistakes; theoretical mistakes led to catastrophic decisions, catastrophic decisions led to catastrophic events, both inside the Soviet Union in terms of economic policy, and internationally. Perhaps the two most important of these were the defeat of the German Revolution of 1923, and the massacre of the Shanghai working class in 1927. These defeats, though caused by the policies of the ruling clique, strengthened that clique by demoralizing the masses. This demoralization, combined with the truly appalling casualties of the most advanced, class-conscious workers in the Civil War, permitted the Stalin faction to solidify its hold and replace self-sacrifice and intellectual honesty with loyalty to the bureaucracy and blind obedience as the highest virtues. The doors of the Party were opened to career bureaucrats, managers, petty bourgeois elements: in short, to forces hostile to the working class. Even before his death, Lenin attempted to introduce measures to limit Party membership so as to insure domination by the working class.

And the “virtues” I mention above were, of course, not empty platitudes; those who proved their loyalty and obedience to Stalin were given the privileged governmental positions. In turn, they sided with the bureaucracy in the struggles against the Left Opposition. With the defeat of the Chinese Revolution in 1927, then, the way was cleared for the Opposition to be expelled and Trotsky exiled, which actions were carried out in 1928, thus securing for the Stalin gang an iron hold on the Bolshevik Party—a hold that could only be broken by further developments of the class struggle.

…that is the moral of the opponents of violence in politics: they renounce violence when it comes to introducing changes in what already exists, but in defense of the existing order they will not stop at the most ruthless acts.