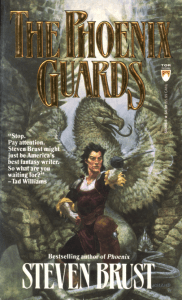 My homage to Alexandre Dumas, one of my favorite writers. It is a blatant ripoff of The Three Musketeers. It all started when we were sitting around assigning people we knew to Dragaeran Great Houses, and I mentioned that a the archetypal Lyorn was Athos in Dumas’ work. Then I said, “Aramis is a Yendi, and Porthos is a Dzur, and…hmm. That’s interesting.” I really never expected this one to be published. I wrote it for the sheer joy of writing it—I giggled all the way through. No one was more surprised than me that, not only was it published, but a lot of other people seem to like it. Cool. Great cover, isn’t it?

Yet there are people who strictly deprive themselves of each and every eatable, drinkable, and smokable which has in any way acquired a shady reputation. They pay this price for heath. And health is all they get for it. How strange it is; it is like paying out your whole fortune for a cow that has gone dry.