I’m currently working up a duet with John Sjogren.  We’re called “Bror.”  If we ever get our shit together, like, to practice, and get gigs, we’ll put up a web site and I’ll link it here.

Photo by Fred A. Levy Haskell.

“A Rose For Iconoclastes” is my first and probably last attempt a solo record. I suppose you’d call it politically incorrect folk music; at any rate, it sounds like folk music and a good deal of it is humorous—in intent, at any rate. The title, for those who don’t know, is a play off the brilliant story by Roger Zelazny, “A Rose For Ecclesiastes,” which you should read if you haven’t yet.

The big thing the record has going for it, in my humble opinion, is some fine performances by Adam Stemple (who also produced it), Sara Diedrich, Gary Schulte, Dakota Dave Hull, and some other great local musicians.

Whatever, if you want to order the tape or CD, you can get it online through CD Baby. Or get hold of:

Oh, one last plug: All the design work is by Geri Sullivan. 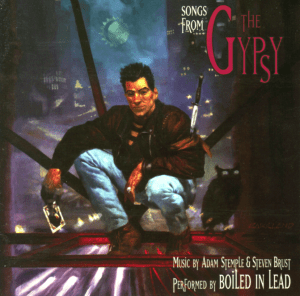 “Songs From The Gypsy” is the recording of a cycle of songs I wrote with ex-Boiled-in-Lead guitarist Adam Stemple, which cycle turned into a novel I wrote with Megan Lindholm, one of my favorite writers.

The petty-bourgeois intellectuals are introspective by nature. They mistake their own emotions, their uncertainties, their fears and their own egoistic concern about their personal fate for the sentiments and movements of the great masses. They measure the world’s agony by their own inconsequential aches and pains.