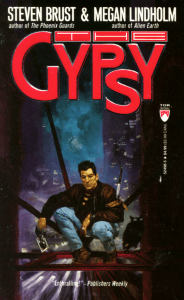 Megan and I first worked together on the Liavek anthology, though I’ve been a fan of her work since her first novel. This actually started as a bunch of songs I wrote with Adam Stemple (guitarist for Cats Laughing and Boiled in Lead), and then turned into the chapter of a book. I had no idea where the thing went after the first chapter (which ended up as the prologue), and I ended up sending it to Megan. We played tennis with it after that, and got together twice for editing sessions after it was done. I’ve never enjoyed working on a book more. I’m very happy with how it came out.