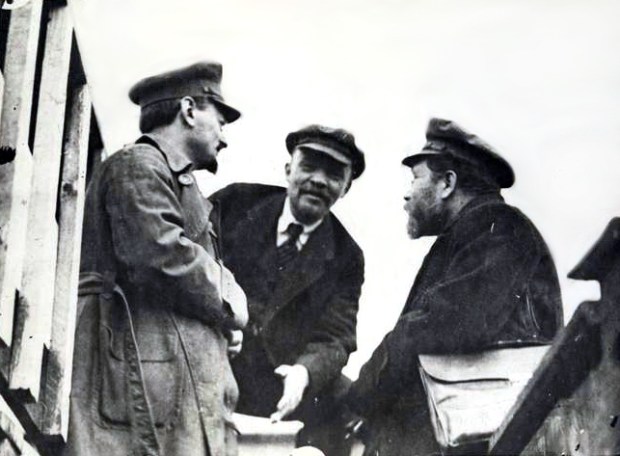 Trotsky, Lenin, and Kamenev at the Party Conference in 1919

At the end of the previous chapter, Trotsky writes, “…the ‘root’ of every social organization is the productive forces, and … the Soviet root is just what is not mighty enough for the socialist trunk and for its crown: human welfare.” This correctly places human productivity at the center. To draw things to the point of absurdity, it is clear that in a society where the day’s labor of each individual is only sufficient to provide what is needed to sustain that individual for a day, there can be no question of everyone having plenty; whereas in a society where one individual’s labor for five minutes could sustain a hundred people for a year, the only question becomes: how much luxury should we create balanced with how much labor we feel inclined to engage in.

Of course, we are neither at the one extreme nor the other; my example is only to show the importance of productivity of labor. But the productivity of labor itself is complex and multi-faceted. It includes the average individual skill of workers in each of many industries, the level of technological development in each industry, the infrastructure that supports each and connects them, the quantity and quality of raw materials—and if that isn’t complex enough, each of these factors dialectically interconnects with all of the others.

“The deathblow to money fetishism will be struck only upon that stage when the steady growth of social wealth has made us bipeds forget our miserly attitude toward every excess minute of labor, and our humiliating fear about the size of our ration.” This is where a scientific, materialist approach to human society cuts through centuries of idealist rubbish. How much of the unhealthy, destructive attitudes toward each other and toward signs of wealth and other objects have at their root nothing more than the conditions of struggle to get by? Of course we get pissed off when our boss wants us to do extra work that we aren’t being paid for, and of course we need to scrape, and budget, and always be looking for how to get more for less; and of course these attitudes will naturally and painlessly vanish when labor is no longer a burden, and when satisfying our wants is no longer connected to arbitrary measures of how “valuable” we are, but rather dependent on the ever-increasing abundance of society and our own needs and wishes. Is there anyone who would deny that we have, today, the material and intellectual resources to make this happen? And the key element to it all is: the productivity of labor.

The point, however, is that the Soviet Union was most emphatically not in a position to do that, exactly because the productivity of labor had begun in such a handicapped position. So then, everything—the survival of the workers state, the creation of socialism—depended on raising it. The Soviet Union had many advantages in this campaign: public ownership of production, the capability for central planning, a state monopoly on trade, and so forth. It is hard to overstate the importance of these factors: consider that they provided the capability of going, in a mere 40 years, from one of the most backward countries on Earth to being the first to conquer space. But if one is to take a scientific approach to raising the productivity of labor, one important thing that is needed is a metric. Fortunately, a perfectly good metric had been inherited from the past: money. Money is many things at once: it is a commodity, it is an economic lubricant, and it is a measure of economic health. But in order to be useful for any of these, and especially the last, it must be stable. “For the regulation and application of [successful economic] plans, two levers are needed: a political lever in the form of real participation in leadership of the interested masses themselves, which unthinkable without Soviet democracy, and a financial lever, in the form of a real verification of a priori calculations with the help of a universal equivalent, which is unthinkable without a stable money system.”

Tying the value of money to a relatively stable commodity (ie, gold), in effect ties it to the value of labor-power, which, in the last analysis, actually determines its value. Hence the importance of tying the ruble to gold, and the reason the decision of the Stalin clique to break that connection made things so much more difficult. I mention this here mostly because it provides such a perfect example of the dialectical relationship between the two “levers” Trotsky speaks of. The lack of Soviet democracy leads to any number of other errors, because it removes the possibility of timely correction of policy errors.

And here, once again, we return to what I believe is, for contemporary readers, they key question: the failure of Soviet democracy. The simplistic notion of Stalin as a “bad guy” who overthrew the “good guys” answers exactly none of the questions. Unscientific nonsense about “revolutions always result in totalitarianism” tell us nothing, especially when we observe that essentially all of today’s democracies had their origin in revolution. We might, to be sure, spend a fair amount of time on the psychological characteristics of Stalin, distinguished by rigidity, lack of imagination, inability to generalize, and so on; but this also fails to address what I believe is the real question: how did an individual with these characteristics come to have so much power concentrated in his hands? Or, to put the question another way, how did it happen that an undemocratic bureaucracy usurped control of the Bolshevik Party, the Soviets, and the country?

That is the question I’ll be taking up next.

Suspension of disbelief is a lot easier when somebody is naked.