Steve has been asked more and more what he’s going to do once he’s finished the Vlad stories, but he’ll never tell. I, however, have the secret insider knowledge of what cometh next. I think the fans deserve to know. So don’t tell skzb, but I’m going to reveal to you the general outline for the sequel cycle.

Jhereggeddon — Vlad must assassinate his biggest target yet: an asteroid.

2 Yendi 2 Furious — Carriage racing makes a comeback on the streets of Adrilankha but no one could have known the political consequences!

Teckla of Dreams — If you build a robust urban society, hardy but cheerful members of the peasant underclass will come.

Phoenix 2: The Empire Strikes Back — Vlad survives a frozen wasteland, trains his witch powers in a swamp, then finds out who his father really is.

The Athyras of Eastwick — Vlad grants the wishes of three single ladies of the Athyra. Hijinx ensue. Then he kills them.

How to Train Your Dragonlord — Teenage Vlad has a charming coming-of-age story, co-starring a large floppy black kitty. He defeats the House of the Dragon, brings peace to the village, and actually kisses a suitable romantic partner, for real.

Mrs. Doubtssola — HELLLLLLOOOOOOO! Vlad hides from the Left Hand in the last place they’ll expect: as a lady nanny for his own son. 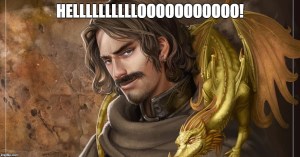 Dzur Hard With a Vengeance — The Dzur do some Dzuring around Dzurtown and things just might get Dzurtabulous!

Jhegaala 2 — Consists of three books written at once in collaboration with another Steve, accompanied by four wide-release feature films, following Vlad’s adventures on an alien world where he discovers a society where everyone is taller than him and also blue-skinned.

Legally Iorich 2: Red, White, and Blonde — Vlad becomes a voice for the voiceless when he helps an Iorich friend save cute dogs from cruelty.

Tiassas of the Galaxy: Vol. 2 — Vlad and friends have a psychedelic adventure in far-flung regions of space. They steal a guy’s prosthetic eye. Vlad finally finds out who his father is, again.

The Wrath of Hawk — A mysterious Hawklord that Vlad previously defeated turns up again wearing a cool barbarian space vest and puts creepy mind-control worms into everyone’s ears. Vlad has been, and always shall be, your friend.

Pride and Prejudice and Vallista — Vlad teams up with Lizzy Bennett to fight a new foe: architects gone mad with power. Meanwhile, Vlad’s sisters are excited about the marital prospects offered by the new tenants of the mansion overlooking the ocean-sea.

Tsalmoth 2: Electric Boogaloo — Vlad competes in the dance-off sequel we deserve and finds out who his father really actually totally is, for real. Jesus tap-dancing Christ.

He shoved the curtains back and looked into the yard like it’d better not have anything to say about it.