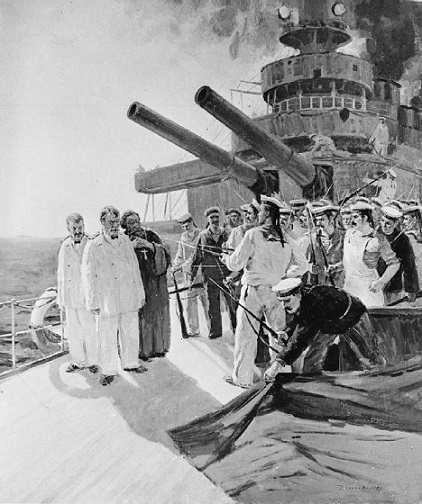 The mutiny of the battleship Potemkin, 1905

One of the more interesting things I’ve realized as I’ve gone through the book is the degree to which Trotsky’s polemic was aimed in the opposite direction of mine. That is, I am attempting to show that the bureaucratic degeneration of the Soviet state is not an inevitable feature of proletarian revolution, but rather a response to the particular national and international conditions at the time. Trotsky was focused above all on showing that the Soviet state was deeply flawed, not the perfect realization of humanity’s dreams that Stalin’s apologists saw it as. Today, it would be hard to find 6 people who were still convinced of what was, at the time the book was written, an extremely common perception. This difference of intent is why, after going through the first half of the book with relative care, my notes are so much scantier in the second half.

“The revolutionary vanguard of the proletariat was in part devoured by the administrative apparatus and gradually demoralized, in part annihilated by the civil war, and in part thrown out and crushed.” (Page 90). Two pages later, we get to what I think is the real heart of the matter: “We may lay down approximately this sociological theorem: The strength of the compulsion exercised by the masses in a workers state is directly proportional to the strength of the exploitive tendencies, or the danger of a restoration of capitalism, and inversely proportional to the strength of the social solidarity and the general loyalty to the new regime.” And then, on page 96, “The basis of bureaucratic rule is the poverty of society in objects of consumption, with the resulting struggle of each against all.”

Much of the rest of the book details the repression and abuses of the masses under the Thermidorian regime, tracing the reasons for them, and tearing aside the lies that surround them, but that is beyond the scope of what I’m hoping to accomplish with this series of posts. However, I do want to spend a moment on Chapter 9, “What is the Soviet Union?” Page 203 poses the problem nicely: “If a ship is declared collective property, but the passengers continue to be divided into first, second, and third class, it is clear that, for the third class passengers, differences in the conditions of life will have infinitely more importance than that juridical change in proprietorship.”

On page 207 is, perhaps, the best summation of the state of the Soviet Union in 1936: “To the extent that, in contrast to decaying capitalism, it develops the productive forces, it is preparing the economic basis of socialism. To the extent that, for the benefit of the upper stratum, it carries to more and more extreme expressions the bourgeois norms of distribution, it is preparing a capitalist restoration.” And here is the key to answering the question, “what is (or, rather was) the Soviet Union?” It is natural to want to slap labels on things—we feel more comfortable with them, and when we know to what category something belongs, it helps us begin to address how to deal with it. This is reasonable, useful, so long as we are sufficiently flexible about what things belong in what categories, and when the categories themselves change. And here is the problem with the Soviet Union: it was neither one thing, nor another. It was not capitalism, because ownership of the means of production was held in common; it was not socialism, because the fruits of production were not divided equally. It was something “neither fish nor fowl,” but rather a society in transition between them. It is as if we were to see a tight-rope walker in the process of losing his balance and struggling to retain it and were trying to answer the question, “Is he on the wire, or is he falling?” Both of those conditions, balancing and falling, are real, and are different from each other, but there is a point where our acrobat is between them, and either answer is wrong. The Soviet Union maintained that condition for some 70 years.

The question has come up more than once, and has caused no small amount of confusion and disorientation: was the Soviet bureaucracy a ruling class? Obviously, it is impossible to answer this question without defining “class.” Without question, there are those who define class by the amount of money they have, which is tempting by its very vagueness: it is impossible, and therefore unnecessary, to put precise boundaries on such a thing, yet it does fit in well enough with our common perceptions of day-to-day life: we do see how the super-rich live, we see how the poor live, and it is obvious there is a huge difference, and we can assign “middle-class” to those in between, and thus have conversations about how unfair it is that the upper class is so much higher than the poor, and don’t you think we all ought to meet in the middle somewhere?

But if we understand that human society is a mechanism for creating and distributing articles of want, thus providing more than any of us could create individually, and if we want to understand a given society, then, above all, we need to understand how the process of production and distribution works through the activity of individuals in that society, and the place of those individuals within that process. When I use “class” I refer to this position. The slave-owner sells the products of the labor of human property, called slaves; the landlord or aristocrat sells the product of the labor of the peasant, who works and lives on land owned by another; the capitalist sells the product of the labor of those whose labor-power he has bought, ie, the proletarian. The petty or petit bourgeoisie usually refers to those who, if you will, exploit their own labor by producing value, and then sell the commodities thus produced (as a freelance writer, I fall neatly into this category myself).

In a factory, there are maintenance people of various sorts, who, while not directly involved in production, are necessary to keep operations going. Similarly, for a government to operate, it is necessary to employ people outside of the police and military forces that are the heart of the state, simply to permit the machinery to function. Just as the maintenance people in a factory are part of the working class, so too are the governmental functionaries. In some cases, the bureaucracy that handles governmental functions can become huge and powerful, Prussia being one example. Sometimes, these functions can even become hereditary and carry with them pomp, prestige, and wealth, just as in special cases a worker, such as an actor or a sports figure, can become a wealthy celebrity. To make it even clearer, a trade union is a working class organization. It is possible (actually, today, it is pretty much certain) for a trade union to be run by a non-democratic bureaucracy working in the interests of the capitalists, but that doesn’t change the nature of the union as a working class organization, and it doesn’t turn the bureaucrats into capitalists.

So, why does it matter? At the time the book was written, it mattered a great deal. The October Revolution was a political revolution, in that state power was transferred; and an economic revolution, in that a new class, the proletariat, was brought to power. The crushing of democratic rights within the party, the Soviet, and society, still left the economic change in place. This meant that half the job, if you will, was done: what was required was a political revolution, not an economic revolution. Whether that revolution could succeed depended on many factors: the growth of productive forces within the Soviet Union, which increasingly made the ruling clique obsolete; the activity of the international working class, each advance of which was a threat to the bureaucracy; and the actions of imperialism, which kept constant pressure on the workers state, drained resources from the country, and simultaneously coerced and encouraged the Stalinist gang to betray the working class in other countries.

Marxists call the transitional period between capitalism and socialism a “workers state”. The degenerated political leadership of the Soviet Union deformed it, but had not, at that time, destroyed it. This is why the term “deformed workers state” is used in Marxist literature to describe the Soviet Union.

ETA: Some excellent questions have come up, concerning what I mean by petty-bourgeois influences and Stalin’s role.  I think the questions are important enough that I want to address them here, rather than in the comments.

First of all, the issue is not why Stalin became General Secretary, but rather, how did what was essentially a clerical position in 1922, come to have so much power by 1924? It should be clear that this was a protracted process, no one, not Lenin, Trotsky, or anyone else, considered Stalin a representative of the petit bourgeoisie at the time of his appointment as General Secretary; he was a rather minor, unimaginative, short-sighted, but determined and uncompromising party operative.  As the forces alien and hostile to the revolution gained power, they needed someone who was unimaginative, short-sighted, but determined and uncompromising.   The process of gradually  taking on more and more of the decision-making, of course, coincided in part with Lenin’s illness and Trotsky’s absence from Moscow while at the front lines; but this is only answers one part: how did the technical, day-to-day procedures become placed in Stalin’s hands?  The larger questions, why was he permitted to make those decisions, why did he choose to make the decisions he did, and why were those who opposed him less effective, has to do with, well, really, everything I’ve been discussing in the preceding 12 posts.

The petty-bourgeois elements were largely the kulaks and the careerists in the bureaucracy (who were not, technically, petit-bourgeois, but had interests in common with them, just as the manager of a business may be a worker, but have more interests in common with the owners), as well as those who, under the NEP, had created capitalist enterprises.  These were actual forces in society, and so found someone to “speak” for them, in much the same way that, today, the elements in the ruling class that want to crush the proletariat right now have selected Trump as their spokesman, those who think it possible to fool the working class with the possibility of reform have selected Sanders, and the ones who hope to continue business as usual are backing Clinton.  The peculiarities of character in a given person make that person more or less suitable to represent different sections of society.   Once those forces were in play—the revolutionary forces represented by the Left Opposition, the reactionary forces by Stalin, Zinoviev, and Kamenev—the development of world events was the determining factor in the fight for power between them.  It was a test of strength far, far more than a test of ideas or personality.  Or perhaps I can simplify by saying this: The class forces have far more of an effect on selecting who speaks for them, than the personality of that spokesman has on the class forces.  This is equally true of Stalin, of Lenin, and of Trotsky.