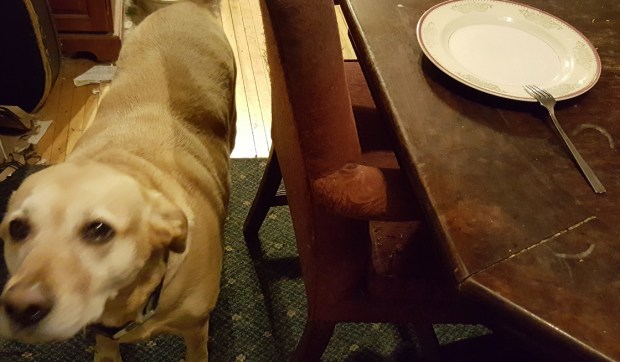 My House is distinguished by its informal dining atmosphere.

In general, I think “informal” best describes the atmosphere of this establishment. In going for the relaxed, comfortable feel, the proprietor fully succeeded, but perhaps went too far. No one greeted me when I arrived, and when I shouted “Hello,” the only response was a shout from another room saying hello back (although the person returning my shout did appear to know my name, which I thought was a nice touch). While I’m not about to set the health department on the place (everything seemed clean enough in general), I must add that there was a cat wandering casually around, and at one point, even a dog came up to me as if it expected me to share my meal! The result is a pretty “homey” atmosphere, enhanced (for me, though I realize not for many of you) by the fact that I was actually able to smoke between courses.

I started with a cocktail, a simple Irish whiskey, served neat, that of course was perfectly satisfactory. The liquor selection is small, yet, remarkably, well supplied with items that I like. They even had my preferred hard cider, Angry Orchard, although I didn’t have one on this occasion.

The appetizer I selected was the “Olives and Cheese Plate,” which proved to be garlic stuffed olives and Cahill’s Irish cheddar cheese with porter. An unusual combination, to be sure (feta is more typical), yet I found it worked rather well.

The salad was exactly the sort I like: Iceberg lettuce (yes, iceberg lettuce—don’t judge me) with red onion, scallions, cucumber slices, radishes, and red bell pepper, served with balsamic vinaigrette dressing that was distinguished by a truly remarkable olive oil called Arouri. If I had to complain about anything, I’d say that the balsamic vinegar was a bit cheap, and the salad could have used cauliflower and red cabbage, but all in all it was quite good.

For the entree I went with the chuck roast. It was thinly sliced, and had been slow roasted over low heat in a mixture of olives, garlic, onion, tomato juice, cumin, and balsamic vinegar. It was tender, and the flavor was most satisfactory, especially when accompanied by a sauce that was, I was told, simply the roasting mixture reduced and pureed. To go with it were roasted baby red potatoes served with salt, pepper, butter, paprika, and sour cream. For wine, I selected an Egri Bikaver. On reflection, I think a pinot noir or a Burgundy would have done better with the roast, but I can hardly blame the establishment for my choice of wine!

Dessert was a fruit salad, surprising in its simplicity: grapes, orange slices, and strawberries, mixed with whipped cream and a dash of Cointreau.

My biggest criticism has to be the service: It varied between abysmal and non-existent. In the end, I was required to fetch all of my own food from the kitchen, which was extremely annoying, and to return the empty plates. (I also had to do the dishes, but as that was in lieu of payment, I’m not complaining about it.)

In summary, I was not dissatisfied, and I intend to return soon and try the sukiyaki.

Four stars out of five.

A lot of hairs were at stake here, so you had to split some of them.