I’m not writing this with the idea of changing the minds of any self-identified Libertarian—before I take that on there are some windmills that must be defeated. This post is an effort to understand where they’re coming from. We all have a few friends who hold these positions, and about whom we think, “Yeah, but he seems like a nice guy. And so normal. I hardly ever see the horns, especially under that motorcycle helmet he hates being made to wear.”

There is this belief among large sections of the Left that, to be a Libertarian (using “Libertarian” in the limited sense of Right-wing anarchist, or supporters and sympathizers of the Libertarian Party, or Randites, &c), one must be Evil. Or, at any rate, not care about the suffering of others. And, many think, they’re probably bigots, sexists, and care more about their right to smoke weed than about the homeless.

I don’t think it’s that simple. It might seem so, because some of the core beliefs of Libertarianism easily, perhaps inevitably, lead to positions that are deeply hostile to what many of us (including me) consider human rights—as I’ve said before, if you accept that property rights can be higher than human rights, you’ll find yourself supporting the most appalling positions and never know how you got there.

For a classic example of what I’m talking about, look here.  Penn Jillette is a pretty smart guy, and, by all reports, not a jerk.  But his specialty is slight-of-hand, of which this is a delicious example.  When he says that taxation is the state taking things from the people “at gunpoint” he is essentially correct; the state at its heart is simply a bunch of people with guns, and mechanisms for controlling the use of those guns.  But the card he’s palming is that the whole reason for the state’s existence in the first place, the reasons those guns exist, is to protect private property.  So when the state comes in and takes some of your property, well, it is only your property in the first place because the state defines it as such through laws determining what can and cannot be private property, regulates how it can and cannot be used, and then protects your right to keep it.  Changing the definition of what property can be kept under what conditions might be really enraging, like when the GM suddenly nerfs your favorite weapon, but that remains the state’s job: to represent the property-owning class in the best way it can at a given time and place.  Arguments between liberals and conservatives are arguments among those who control wealth and property over how best to manage it for their combined interests, and the heat and fury of these arguments reflects the degree to which those interests conflict, uncertainty about how best to represent those interests, and sometimes desperation over the possibility of finding any solution at all.   Mr. Jillette’s argument is flawed, and if broadly adopted would lead to conditions that can only be called Dickensian; but it does not reflect someone who is evil.

This forces us to ask: What, other than holding great wealth and having the desire to keep it, can lead one to a position whose end result is such barbarity?  Or, to put it another way, what is attractive in this philosophy to those who do not have immense wealth?  There are any number of answers to this question, including the desire to believe that one might acquire great wealth, or having been subjected to Ayn Rand at an impressionable age,  or, well, sometimes it really is pathological selfishness.  But  I think what is usually at the foundation of the appeal of Libertarianism is a deep hatred of coercion. And, seriously, who can’t understand that? I mean, not many of us like being coerced. We don’t enjoy being told what we can and cannot do. As a smoker who is now forbidden to smoke (or even use an e-cig, fer chrissakes!) just about anywhere, believe me, I get it.

For now, my point is not about the problems of trying to invent a socioeconomic system based on one’s likes and dislikes, rather than on a scientific understanding of historical processes. My point is, I think they are missing something important, something that has led those of us on the Left (even the ones with whom I vehemently disagree on almost everything except, “these things are problems”) to such drastically different positions.

The issue is coercion itself, and I would argue that human beings have been fighting coercion as long as we have been in existence.  But there are more kinds of coercion in heaven and earth, Milton Friedman, than are dreamt of in your philosophy.  If we define coercion as being forced to act or to refrain from acting in a certain way regardless of one’s wishes, then Man has been fighting coercion by nature since before we separated ourselves from the rest of the animal kingdom.  The simpler our society, and the less we understood natural processes and how to make them work for us, the greater were our choices limited by nature.  But the real gotcha came when we had made great strides in understanding nature, in division of labor, in forming complex societies that were able to free us from the burden of dominance by our environment, because, in doing so, we created the situation where these societies themselves coerced us.  Class society—an important and necessary step forward for humanity—brought with it for the first time a class able to make choices about how to devote the greater part of its time, but it supported these few by a system of slavery, that is, with human beings defined as property.  It also, in order to protect that property, for the first time introduced the state.  Other forms of property have accompanied progress, but it has, so far, always come down to a minority being relatively free of coercion at the expense of the majority whose choices were curtailed or entirely nonexistent.  One of my earliest memories of my mother becoming really angry came when she was looking at the cover of some magazine, maybe “Look,” that showed a Jamacian child under the caption, “A future sugar field worker.”  And she was angry, of course, because the magazine was right—that child would work in the sugar fields.  There are children in Kentucky and West Virginia who, if nothing is done, will grow up to work in the coal mines because they have no other choice.   Others don’t even have that to look forward to: poverty, hopelessness, and crime are in their future, and there’s nothing they, as individuals, can do about it.

.And here is where we get to the crux of the matter: The greater part of the human race faces coercion to a humiliating and degrading degree by the necessity to secure food and shelter, not because society can no longer easily supply all of those things, but because society is organized around the principle of private profit, which by its nature coerces most of us into spending 40 or 50 hours a week for forty years of our lives merely to live. In the worst cases, generations of poverty, and artificial systemic oppression in its various ugly faces provide even more coercion, fewer choices.

When some entitled reactionary says, “Want to escape poverty? Want to get a free education? Join the army!” what he is saying is, “I have a thousand choices for what to do with my life, you have two. So pick one, and stop complaining about being coerced.”  It is easy to recognize helmet laws as limiting personal choice; it is harder to recognize that being forced to spend the greater part of your life working to make someone else rich is also limiting personal choice.  I not only believe the latter is coercion, but I believe it is more fundamental to how society works.  Like the Libertarian, I favor full human freedom (except, of course, the freedom to exploit the labor of others, which inherently denies them freedom).  Where I part company with them is that I consider freedom from material wants to be a necessary precondition for spiritual freedom.

It is no longer necessary.  If the full technical and creative force of humanity were working on it, those sugar fields could be worked by robots, the mines by machines, all of the goods needed for all of us produced with little or no need for oppressive labor, but only the sort of “labor” that is fulfilling to, well, to us geeks, engineers, those with a passion for tinkering and fixing and making stuff better.  There are immense numbers of those people now; how many more would there be with full education, and with the leisure that would come if there were an even division of wealth and toil?  We could get there easily; but such changes are simply incompatible with production and distribution based on profit. 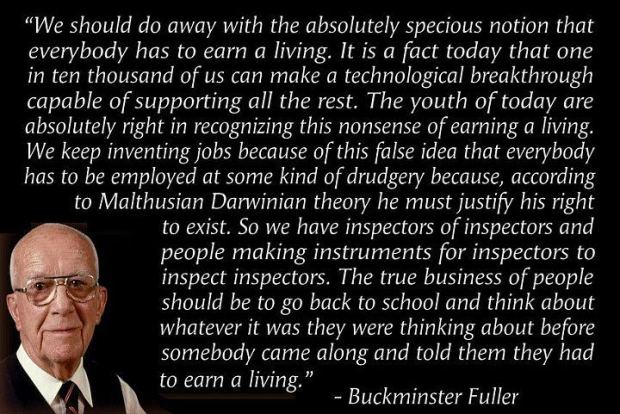 Yes, I hate individual, personal coercion by constituted authority, especially when (as it so often is) it’s arbitrary and stupid and an excuse for an emotionally stunted swine to find fulfillment through exercising power. I would like to see that ended. Furthermore, I am fully confident that doing so is achievable. But before we can end coercion by authority, we must create a society where authority is not needed to keep anyone in line. That means a society where people are not having their heat cut off in winter, where drinking water is not poisoned, where bombs are not raining down on the heads of children, where homelessness, untreated disease, and hunger are eliminated; because the existence of those things absolutely requires authoritarian measures, violence, and the threat of violence to protect the entitled from the oppressed.

So, my fellow Leftists, here is the disconnect: Libertarians hate coercion as much as we do, but they do not see it in some of the places that we see it, perhaps thinking that such things are the “natural order” or “just how things are.” No, it is by no means safe to believe they don’t care about human suffering.  But because they do not see coercion in the blind forces of nature and society, but only in the deliberate actions of individuals and institutions, they have created an ideology whereby (in their belief) removing personal coercion will relieve human suffering.  Needless to say, I disagree, but that is not the point of this post.

And, just on the off chance a Libertarian has stayed with me for all of this (for which, thank you), I would ask you to consider that there are more kinds of coercion than just income tax, drug laws, eminent domain, and mandatory immunizations. If we are to reach a place where we can tackle coercion by authority, we must first find our way to full social and economic equality, which can not be done otherwise than by, at last, putting an end to the fundamental coercion that is private property in the means of production.

If Lenin and Trotsky had behaved in 1917 as ‘respectable’ social democrats, collaborated with the Provisional Government, cleared the way for Kornilov’s victory, and then perished in a fascist debacle, liberal historians today would no doubt write of them as sympathetically as they do of Salvador Allende.