The defenders looked out from he walls of their small fort. Against the endless horizon of stars, lit by unholy fires and terrible magics, the Illiterati came.

Noxious fluids burned in the bellies of television golems. A clockwork monster with boombox legs hurled pop music into the air. Leading the army across the parched grass, soap opera writers sat astride huge tabloidons, sleek monsters who stamped their fad diet feet and stabbed the air with cruel tusks of celebrity addiction.

Their eyes met. Steve nodded quickly to Skyler. As one, they drew their weapons, gripping tight the alchemical miracles of wood and ink.

“The darkness may yet take this land,” Steve said.

The Illiterati howled in the darkness, as if sensing that their ancient enemies were near.

“Maybe,” Skyler replied. She lifted her weapons. “But not tonight.”

Steve, uncharacteristically silent, only smiled, lifted his implements, and waited for the horde.

Lynn Sampson for “Cool If It Were True”:

Jose Marquez for “Best Out Of Ouvre Reference”:

OK, this paired juggling-while-reading routine is going to change the world of author signings forever. Get some sleep,
because tomorrow we move on to four books each…

And the winner is… 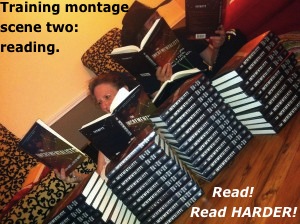 Congratulations and thank you to Ethyl!

This has been lots of fun. The past couple of days, Skyler and I keep running over to each other and saying, “hey did you see the new caption! OMG!” Thank you to everyone for playing with us.