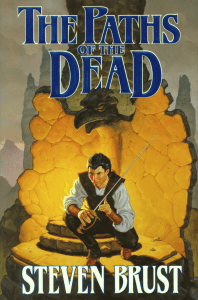 This is a good place to explain that The Viscount of Adrilankha is not a trilogy, it is a three volume novel. That is, it should be thought of as a single book. The Khaavren Romances are, in fact, a trilogy, of which Viscout is the third novel. Therefore, these five books are clearly seen to be a triolgy consisting two one-part novels and one three-part novel. Each part consists of two “books.” Therefore, chapter four of book two of part three of the third book is easily seen to be chapter fifty two of the third novel, or chapter one hundred and twenty of….

Okay, to hell with it. Call it a trilogy. I don’t care.

The philosophers have only interpreted the world in various ways. The point, however, is to change it.