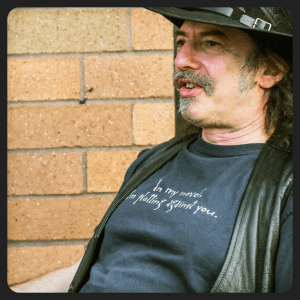 I’m being published by Tor Books.

My agent is Kay McCauley.

I have, as I mentioned above, one solo record, “A Rose For Iconoclastes”.

I have written some of the songs for the Worldbeat band Boiled In Lead, including, particularly, Songs From The Gypsy, which is the recording of a cycle of songs I wrote with ex-BiL guitarist Adam Stemple, which cycle turned into a novel I wrote with Megan Lindholm, one of my favorite writers.

Speaking of favorite writers, I have the honor to be in a writer’s group with Emma Bull, Pamela Dean, Will Shetterly, and the afore-mentioned Adam Stemple, who may never before have been afore-mentioned.  You’re welcome.

There’s been some speculation on the Internet about my politics. Without going into great detail, I’ll say that I am a Trotskyist sympathizer; for more information check out the World Socialist Web Site. Enough said.

There’s also been some speculation about the Pre-Joycean Fellowship. The best explanation I can make is that we exist to poke fun at the excesses of modern literature while simultaneously mining it for everything of value. Does that help? I didn’t think so.

“Dream Cafe” is a reference to the title song of a record by Greg Brown, who, along with Dave Van Ronk, is among my favorite songwriter/performers. Check them out if you haven’t.

If there are questions about the books, I probably won’t answer them because I enjoy hearing the speculations. But you never know; there might be something I want to talk about here, like the Cool Stuff Theory of Literature, or something. So ask. I’m at skzb@dreamcafe.com.

Cheers. Catch you on the Funway.

*Counting the collaborations and the currently unpublished Baron of Magister Valley, but not counting the fanfic novel My Own Kind of Freedom. 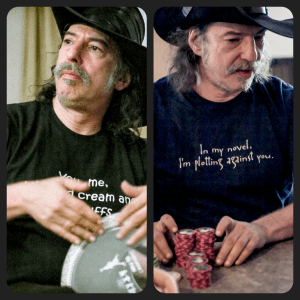